Vitiligo & Leucoderma are long time devastating disorders which have more social values as compared to medical.
Before treatment of Vitiligo one should know about causes of Vitiligo.
According to Ayurveda “Switra” (Vitiligo) is ‘tridosaj’ which means all three dosas(biological forces) vata, pitta and kapha gets disturbed in it. Moreover more responsible into it is pitta (heat). There are 5 types of pitta. Among them disturbances related to ‘Bhrajaka pitta’ which maintains the skin colour, luster and glow is mostly responsible for Vitiligo.
Ayurveda indicates & ‘virudh ahar sevan’ (for example - eating fish & milk together) as basic common reason for Vitiligo & Leucoderma. Actually it is odd food combination which causes ‘Autoimmunity’ (a condition in which immune system of body destroys its own cells & tissues). Formation of toxins starts inside the body which ultimately disturbs the immune system. ‘Bhrajaka pitta’ disturbance is caused due to this which there is less or nil pigmentation. Absence of pigments converts the skin colourless. In modern language and according to modern medical science, due to the disturbed immune system, the pigment producing melanocytes cells gets inactive or degenerated and thus “vitiligo” is formed. Vitiligo is also named ‘Safed daag’ in hindi.
Other related causes of Vitiligo could be improper hygiene, inappropriate food combinations, regular junk food intake, insecticide/pesticide treated green vegetable intake regularly, past history of Jaundice or Typhoid fever, harsh Antibiotic use etc. One important cause of Vitiligo could be sudden emotional trauma, stress or some immunosuppressant conditions.
Cause of Leucoderma could be accidental as a cut, burn or an ulcer. With due reasons the melanocytes cells (which produce melanin pigment) get dormant or inactive. Due to this dormancy or inactivity the pigmentation gradually disappears from the skin layers and the skin converts white there resulting into a white patch.
Hereditary condition which is almost 10-15% responsible is also attached as one of the common causes of Vitiligo. But this is not certain that all the kids of vitiligo affected parents develop it. Several families can be found unaffected despite family history of Vitiligo. 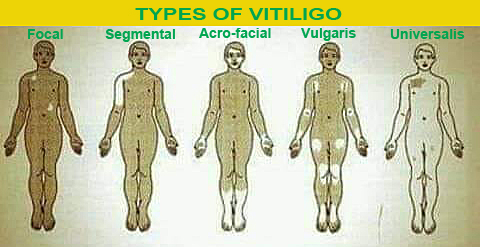 Ayurveda is science of Herbs. The herbs have the potential to improve immunity, provide pigmentation without harming the body. Such herbal formulations developed under guidance of an Ayurvedic’ vaidya’ or Doctor helps in vitiligo condition. The production of skin pigment melanin is regularised by work on root cause. Work on overall metabolism makes Ayurvedic Treatment for Vitiligo different from others. Strengthening the immunity system assures no further relapse of disease. The herbs help to balance the vitiated ‘doshas’ and maintain the equilibrium of these three functional intelligences of body mentioned in Ayurveda.
Actually complete health condition is achieved only by balancing these three ‘dosas’ as mentioned in Ayurveda texts like Charaka Samhita and Susurata Samhita.
Some food restrictions are also guided under Vitiligo treatment in Ayurveda just to assure faster recovery and to control the spreading of vitiligo spots.

Facts behind Vitiligo and Leucoderma

• This is a silent disorder as if no pain or burning may be felt during its onset
• This is considered neither infectious nor contagious
• Most cases do not have any symptoms
• In dark people it looks more ugly with respect to white people because of its prominence and white colour
• Yoga & meditation can reduce chances of vitiligo spreading
• Your heigine and good food habits can reduce chances of having vitiligo
• Taking suppressive treatments like corticosteroids, steroids can lead to widespread spreading of the patches in most of the cases of vitiligo & leucoderma.
• It’s always better to avoid chemicals and chemical treatments in vitiligo & Leucoderma. 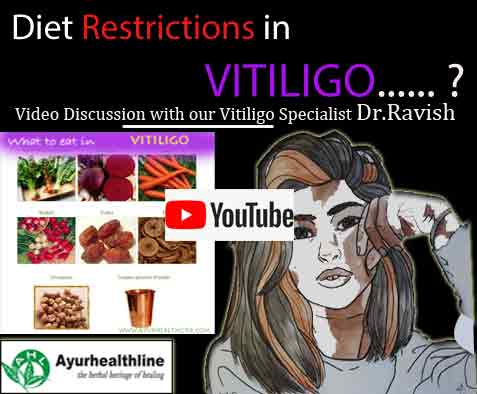